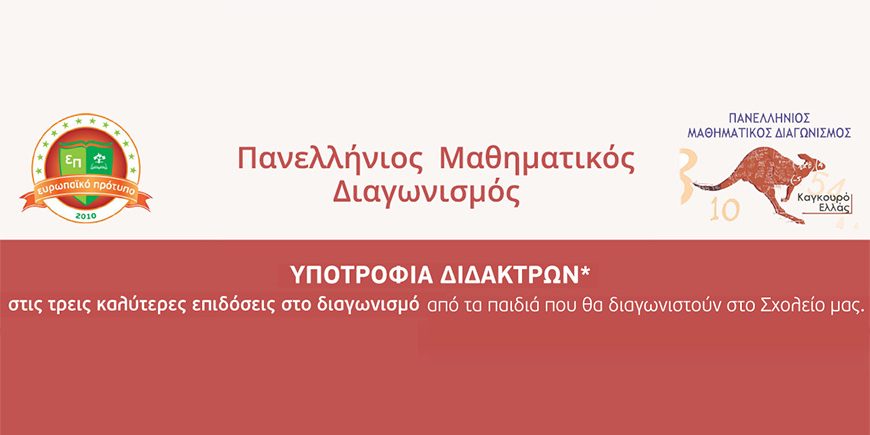 Mathematics in every class in our school is taught not only experimentally, but under a wider prism of critical and analytically synthetics thinking, using not only material from past Kangaroo competitions, but with material created by the school, or from other books with a similar way of thinking (puzzles etc.). The performance of the students in this competition is very different of that of other competitions e.g. The competition of the Greek Mathematics Institute, or the Common Method, as it demands quick thinking, deep understanding of mathematical meanings, problem solving, ability in spatial orientation, mental calculations, and all in all, high mathematical abilities.

A scholarship is awarded to all the children who stand out in the competition and who don’t already belong to the school. The awards are presented by Mr. Mihali Labrou himself, the author of the book of Kangaroo in Greek.

The idea of a competition began in 1991 when representatives from eight countries (France, Russia, Hungary, Belarus, Holland, Poland, Rumania and Spain) with a widrange of experience in worldwide Mathematics competitions, decided to organize a competition that would be aimed at all students, not just those who had high grade at Mathematics.

A year later, in 1994, the first represental founded the Worldwide Organization Kangaroo Sans Frontiers (Kangaroo without boundaries) based in Paris.

The main aim of the organization was the promotion of Mathematics in a fun way without racial or social distinctions.
At the same time they organized a Mathematics competition using the standards of a successful countrywide competition in Australia, from which, with a small dose of humor, they took the name for the new competition.

Greece has been a member of the organization Kangaroo Sans Frontiers since October 2006.

Today nearly all the European countries America and countries of Latin America and Asia are members. The different countries which compete in the competition, don’t compete with each other, and don’t compare results. However, the question papers are written jointly by the representatives of the member countries.

Only essential differences are made taking into account the specific educational features of each member country and the analytical programme.

CLIL: Content and Language Integrated Learning
29/01/2020
SEARCH
ΚΕΝΤΡΙΚΟ ΜΕΝΟΥ
Go to Top
Manage Cookie Consent
To provide the best experiences, we use technologies like cookies to store and/or access device information. Consenting to these technologies will allow us to process data such as browsing behavior or unique IDs on this site. Not consenting or withdrawing consent, may adversely affect certain features and functions.
Manage options Manage services Manage vendors Read more about these purposes
View preferences
{title} {title} {title}